It illustrates ‘The Toll Collector’s Riddles’, Robert Cowley‘s article on the artist who said ‘I have been told that my work is not of this century.’ Commonly known as Le Douanier (the customs inspector), he had in fact been a gabelou, or toll collector, ‘a far less exalted position in the French bureaucratic hierarchy,’ before giving up regular employment to paint without success for more than a decade:

At last even the Indépendants debated excluding Rousseau, and it was Toulouse-Lautrec who successfully defended him. The avant-garde were beginning to pay attention to his work. This association is the singular fact of his last years; it is through the artists and writers who came to know him that he begins to emerge from the shadows. The farceur Alfred Jarry, who was also born in Laval, was the first to recognize his extraordinary talent. Barely twenty, Jarry had just arrived in Paris, and he briefly lived near Rousseau in 1893; one supposes that their common background and Rousseau’s local notoriety brought them together. Jarry, the image of the bohemian poet with his shoulder-length hair and drooping mustache, publicised the old gabelou’s work, most notably War, and introduced him into Paris intellectual society.

From now on it is impossible not to name-drop. Rousseau is seen at the Sunday gatherings at Gauguin’s studio, playing a short concert on his fiddle or informing Degas that he will help him with his ‘artistic connections.’ Anecdotes about Rousseau’s naiveté began to multiply as the years went by; even in his life time a considerable legend had formed around the Douanier – the title conferred on him by his new friends was part of it. Rousseau was a natural victim; the pranks played on him were much celebrated. Once, a group of art students sent a man made up to look like the renowned academic painter Puvis de Chavannes to visit him. Rousseau never thought twice about the identity of his guest: ‘I was expecting you,’ he said.

More and more, the Douanier would have the last laugh. Malraux puts it so movingly: ‘Those…who thought they were making of him a figure of fun were to hear long after his death, sounding in their ears, the waltzes played to them by the ghost of one they could never forget…It was only in the manner of Dostoevski’s “Idiot” that the name fitted this man of genius. “There is a terrible power in humility.”

A gravure portfolio of Rousseau’s works includes the rest of The Dream:

In ‘The Tower of London’, Francis Leary writes about its history from its building under William the Conqueror, though its many noble and royal prisoners, and its executions up to the Earl of Essex. It is illustrated by Rowland Emett, with the ghost of Henry VIII  hovering over many legendary events that took place there: 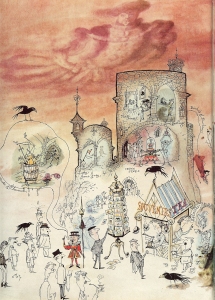 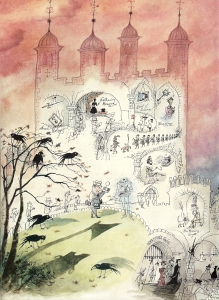 In ‘Joseph Needham and the Science of China’, the historian of science Derek J. de Solla Price writes about Needham and his multi-volume Science and Civilisation in China

Needham’s Science and Civilisation in China, though only half complete, has become a definitive classic for our age, one of the exquisitely rare points of confluence that provides a radiant of departure for all new work.

Needham has set out to relate in seven giant volumes the whole story of the history of science and technology in China in all its social and cultural setting, from the earliest times through the coming of the Jesuits. He is engineering a transmission from one civilisation to another, the like of which has never been attempted. Not even for Western science and technology do we have such a comprehensive account, even though we live in a generation that has begun to realise that global history is dominated by that science and technology, among the most potent productive forces of man, and not just effete, if noble, cultural decorations.

…Never before has a culture other than our own been so meticulously exposed on the dissecting board of history, and never has a teacher been so keen to make us perceive the comparisons and the contrasts in underlying structure.

In ‘The Last Waltz in Vienna’, S.C. Burchell looks at the culture of the city in the decades leading up to World War I, where an outward appearance of ‘gaiety and charm and elegance’ hid a far darker reality, experienced by Trotsky ‘in the cafes’, Hitler ‘in the slums’ and Freud ‘by the couch’.

The events at Mayerling [when Crown Prince Rudolf shot his mistress and then himself] did not grow out of love but out of desperation – and neurosis. That Sigmund Freud was a product of the Vienna of this period shows, as few things can, the uncertain mood of the times…The surface of life, in Freud’s view, counted for little; what lay concealed meant everything. It is surely no accident that the discoverer of the unconscious was a Viennese, for where else in the world did the glittering surface conceal so many dark unmanageable forces? 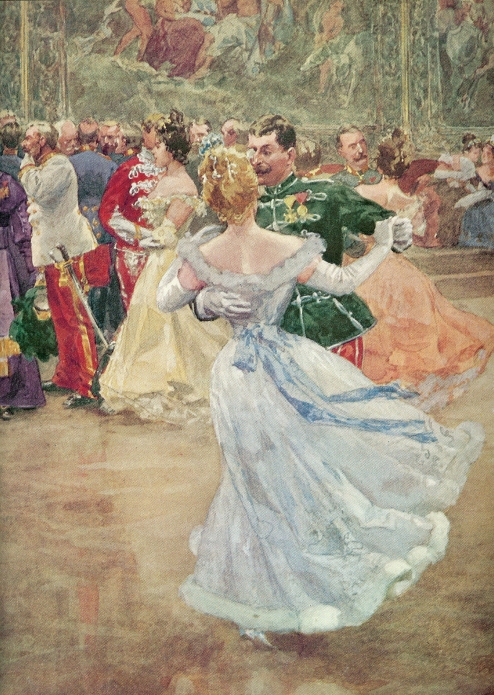 Horizon caption: ‘A gold-braided captain of hussars spins his partner through the intricate steps of a Viennese waltz at the Hofball, a gala dance given annually at the court by Franz Josef.’

Another aspect of pre-WW1 Vienna that would have future repercussions:

It was in Vienna that the impoverished Hitler discovered the political appeal of anti-Semitism. On one hand, the city in the late nineteenth century was a hospitable haven for Jews, who drew comfort from the knowledge that Vienna’s upper classes looked with disdain on the vulgarity of anti-Semitism. On the other hand, Karl Lueger, the city’s mayor from 1897 to 1910, had built his power on blatant anti-Semitic appeals to the Viennese lower classes – the people who, after all, took little part in the graces and pleasures of the visible Vienna. In later years Hitler would praise Lueger for his ‘correct estimate of social forces’ and for understanding that the ‘political fighting power of the upper classes is quite insignificant.’