‘A Museum with a Mission’ focuses on the newly-opened Museum of Anthropology in Mexico City’s Chapultepec Park.

With more than one hundred thousand exhibits, it joins the ranks of the world’s great museums…Vast as the total area is, the sensitive scaling of such elements as stairways and doors, the interplay of gardens and glass-walled galleries, serve to invite rather than intimidate visitors, many of whom will be entering a museum for the first time…Mexicans are coming away from Chapultepec Park with a new understanding of their culture. It is, indeed, an accomplishment unsurpassed elsewhere in the museum world.

The central courtyard is seen here:

The section devoted to the Aztecs includes the Calendar Stone and the goddess Coaticue:

In ‘Some Non-encounters with Mr. Eliot’, Francis Russell writes about his several near misses with T.S. Eliot, who ‘made poets look like board chairmen’ with what Virginia Woolf called his ‘four-piece suits.’ The first was in 1932, when Eliot give a lecture at Harvard as Norton Professor of Poetry. It was his first trip back to America after eighteen years away:

I think most of us were there that evening not so much to hear what Eliot had to say as out of curiosity about his person…And though few of us would have admitted it, one of the things we were all wondering was what sort of accent he would now have.

…The former United States citizen, now a British subject, had certainly absorbed his later surroundings. There was nothing American about him. I suppose he was the last Norton lecturer who ever appeared in white tie and tails.

I suppose I could have met him easily enough just by speaking to the Father Superior. But I never did. Somehow, I could never think of anything I wanted to say to him.

Years later he discovered that his college friend Dick was Eliot’s cousin – he described Eliot’s mother:

‘…a terrible bluestocking. I remember her all right. She was forty-four when he was born. Not many people know it, but he really left this country to get away from her. He loved her, I guess. He always wrote her and used to send her all his books. But he never really felt safe unless he had the Atlantic between them.’

After the war, Russell moved to London and was living in Chelsea, where he often saw Eliot on the Number 11 bus, on his way to the Faber & Faber office at Russell Square. By then he had then written Four Quartets:

Within the aspects of this extended poem, Eliot attempts to come to grips with the deepest problems that human beings have to grapple with: his own and human destiny, life and death, life or death, the mystery of time passing and time to come, the ultimate meaning of his religious beliefs.

In ‘The Marble Cottages’, Mary Cable writes about the grand nineteenth century mansions of Newport, Rhode Island including Cornelius Vanderbilt II’s The Breakers:

Ships arrived from Europe with entire cargoes consigned to Mr Vanderbilt. The Breakers’ music room was designed and executed down to the last detail in France and shipped in packing cases, like a prefabricated house, along with the workmen to put it up. To make this palace supremely fireproof, no wood was used in its construction and the furnace room was placed underground some hundreds of feet away…

The greatest difficulty with these brand-new palaces was to keep them from looking new…Thirty-ton trees were, therefore, hauled in and planted at a cost of nine hundred dollars per tree, but they often failed to thrive in the continual sea wind. It was a difficulty shared by all Newport ‘cottagers’, and when property changed hands, a departing owner often took his trees with him, for they represented a separate and considerable investment.

In ‘The Spanish Inquisition’, Henry Kamen describes the practices that gave rise to the ‘Black Legend’, which he himself would later criticise: 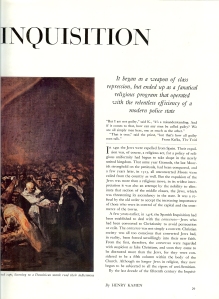 A feature on Lake Geneva, ‘The Thinking Man’s Lake’ with text by Associate Editor Norman Kotker describes how ‘in the sixteenth century, John Calvin and his followers strove to construct the kingdom of heaven on earth. To Calvin’s holy city came exiles and visionaries from all the lands of Europe, followed – in succeeding centuries – by others who were merely seeking a refuge.’ As a result:

…for centuries it has attracted to its shores a constellation of literary talents astonishing for an area so small and so relatively remote from the great capitals of Europe. Here lived Rousseau, Voltaire, and Byron, whose names have been closely identified with the lake ever since; and in their wake came scores of others – novelists as diverse as Dostoevsky and Louisa May Alcott; romantic poets in exile, from Shelley to Mickiewicz the Pole; and numerous literary hangers-on, Boswell and the beauteous Mme Récamier among the most prominent. The auspicious influence of the Genevan shores is reflected in the work of most of these writers; and among the products of their stays are such masterpieces as The Social Contract and The Prisoner of Chillon, Frankenstein and The Decline and Fall of the Roman Empire.

The castle at Chillon which inspired Byron: 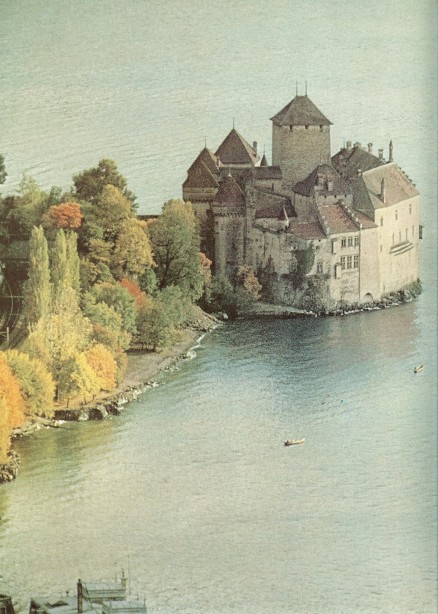