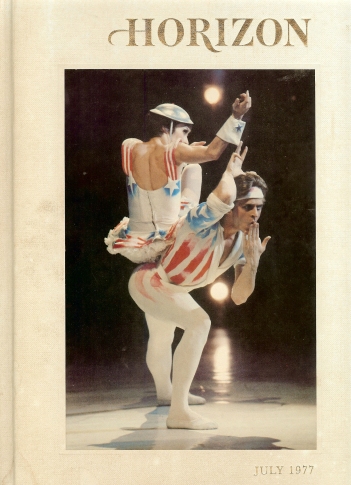 A Message from the Publisher, Rhett Austell, announces that Horizon is now going from bi-monthly (which began in January 1977) to monthly publication in September. This was the last hard-cover issue. It was the beginning of the end: American Heritage would eventually sell it off in 1978 and it would live on as a monthly, focusing more on current events in the arts, until 1989.

In ‘Ferment in Georgetown’, William Barry Furlong writes about Washington, DC’s oldest suburb, one of the first examples of ‘gentrification’:

…one could work in Washington, if one chose to do that sort of thing, but if one wanted to live, one had to go to Georgetown.

Nobody took this more to heart than the liberals of the Roosevelt era and their followers. They first came to town in 1933, and when they began looking for a place at a remove from the city, they found Georgetown, then a run-down neighbourhood – sleepy and forgotten. It didn’t bother them – as it did a lot of other people of the time – that many of the townspeople were black. ‘When we first moved here forty years ago, there wasn’t a white neighbour in two blocks around us,’ says Jean Friendly, whose husband, Alfred, later became managing editor of the Washington Post.

What the newcomers saw was not the color of people but the grace of living. ‘It was a countrified little place,’ says Jean Friendly. ‘You could have a yard and a garden and yet you were only five to seven minutes away from the office.’ Many homes could be bought for one thousand to three thousand dollars. Of course, the buildings were old – mostly from the Federal and Victorian eras – and dilapidated. But the newcomers felt that they could remodel and restore them quite attractively. ‘It was a place,’ says Mrs Friendly, ‘for people with more taste than money.’ Today some people in Georgetown wonder whether the reverse is not true. 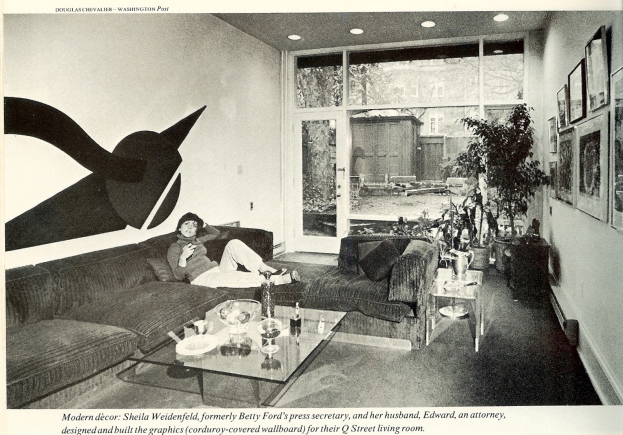 In the Roosevelt years, Georgetown became established as a special place, with qualities in common with other fashionable enclaves that grew up in other American cities: it was in touch with history, and there was a major effort within the community to preserve and restore some of the very old structures; and it had a commercial shopping district that attracted a great many outsiders. Most of the blacks who lived in Georgetown forty years ago are gone today, although a few black families – themselves well-to-do – live at the eastern end of Georgetown, near the border with the city. Georgetown may be politically democratic and philosophically liberal, but it is anything but racially or economically integrated. 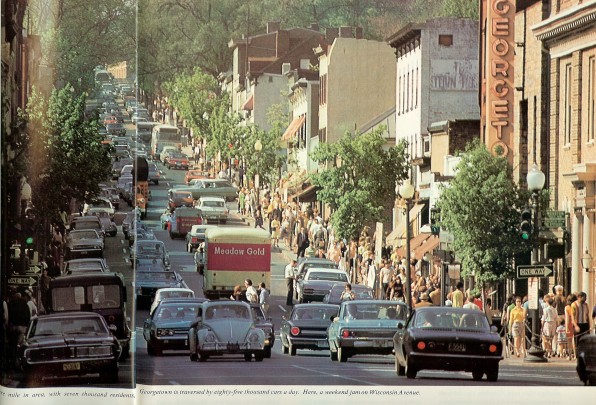 In 1977 it had been two years since the end of the Vietnam War. In ‘America after Viet Nam’, Lance Morrow analyses why ‘predictions of continuing national tensions have not come true’ and comes to a surprising conclusion:

All analyses of the healing of America assume that it was deeply wounded in Viet Nam. Many journalists and other observers of the United States during the period do not believe that Americans were all that profoundly affected by the war. Gloria Emerson, who covered Viet Nam for the New York Times from 1970 to 1972 and then wrote a post-mortem on the war called Winners and Losers, declares: ‘The country was not particularly shattered by the war – so it is not surprising that a healing is occurring now. We are an inattentive and self-absorbed people. I suppose that inattentiveness is also a protection of sorts.’

Ward Just, who covered the war for the Washington Post, believes that the United States is divided into ‘two nations where Viet Nam is concerned – those deeply touched by what happened there (a minority) and those not affected (a very large majority).’ Just remembers visiting a Lake Forest, Illinois country club to give a lecture after he had been wounded in Viet Nam. The audience’s questions betrayed an astonishing ignorance. ‘They had simply tuned out the war,’ says Just.

‘…have turned inward, they have lost their idealism. The idea now is to get ahead, to get jobs. The war, McGovern’s defeat, Watergate, the recession  – all these remind me of what Disraeli said about Gladstone’s ministers: “a range of exhausted volcanoes.’” 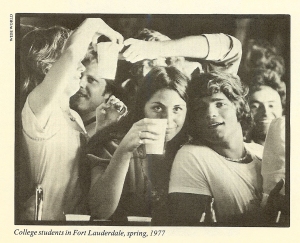 An all-electronic mail system to take the place of the present, old-fashioned post office…The familiar hand-delivered, first-class sealed envelope would survive, one hopes, for that segment of the correspondence in which privacy will still be of some value…

A fully portable personal phone is predicted by RCA. People who have a phobia about talking on the phone will not be cheered by the microminiaturized version’s ability to go where you go.

The hand-held calculator will be succeeded by the hand-held computer. Besides becoming programmable, the personal calculator/computer will have a memory and will work with alphabetical words as well as with numbers…

By far the biggest changes the new electronics will bring to the average family will come from the home computer center…As a start, libraries will evolve into storehouses of microminiaturized information available to every home in response to a touch on a keyboard…

One of the most far-reaching consequences of the new electronics will be the liberation of workers in many occupations and professions from the central office. 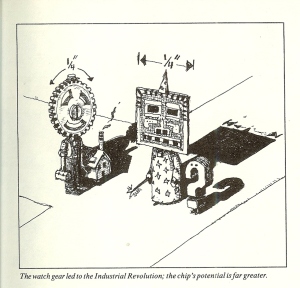 In ‘Miró’s  Latest Works’, Edmund White writes about ‘the most famous of living modern painters’, who as a surrealist 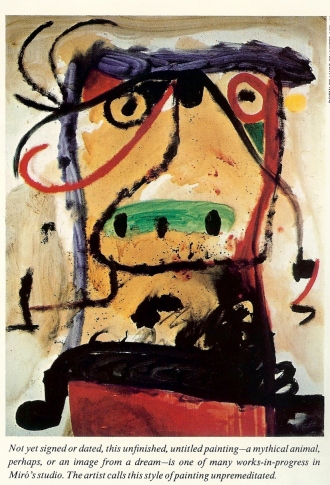 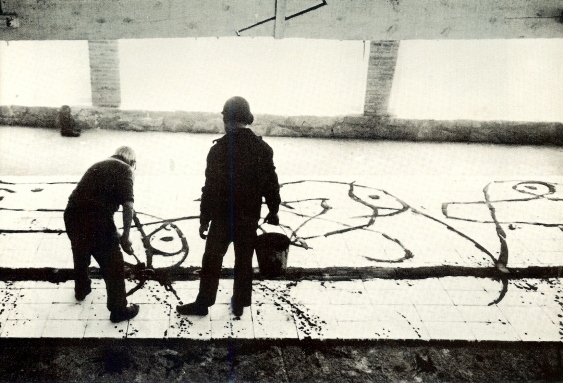 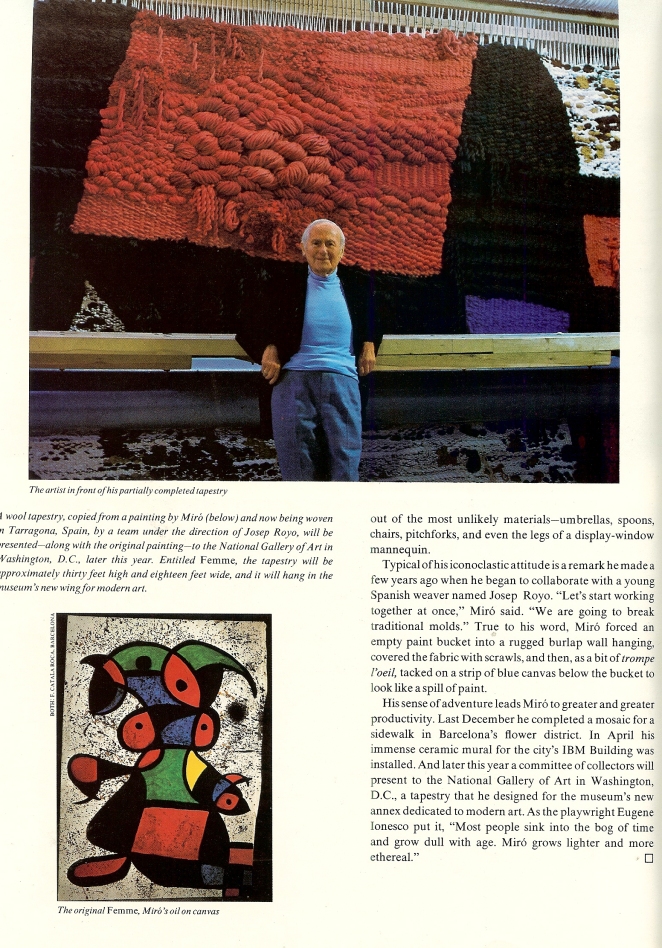