It illustrates an article on Richelieu by C.V. Wedgewood: ‘…the political power he built for France was ephemeral. His greater glory was that he laid the foundations for her intellectual and aesthetic leadership.’

In ‘Dante’s Pilgrimage’ (1965 was the 700th anniversary of Dante’s birth)  Morris Bishop writes about the Divine Comedy:

Suppose an ex-Senator in disgrace should write a giant book examining theories of government and  proposing a new national policy; suppose he should reveal Washington’s public and private scandals, exalting his friends and condemning evildoers to everlasting punishment; suppose he should establish a moral system for the purgation and perfection of the human soul; suppose his thought should lead him to theological science fiction, taking off into space to traverse the infinite universe, attaining to the very presence of God; suppose he should intersperse in his work profound comments on philosophy, science, language, music, art; suppose all this and you will have a modern parallel for Dante and his achievement.

Horizon caption: ‘This frontispiece of a late fourteenth-century manuscript pictures Dante, in a red robe, guided by Virgil, in blue, exploring the successive circles of Hell as described in the Divine Comedy.’

…Dante’s purpose was to save the world. He would display to men – particularly to Italians, and particularly to Florentines – all their burden of evil. He would reveal the reasons for the perversion of virtue, and he would demonstrate how the individual, and mankind, could trample evil underfoot and restore the operation of divine law on earth; and he would offer a heavenly vision of man’s possible, ultimate bliss. He presented a revelation, but a serviceable revelation, an attainable ideal for all times.

‘A Way of Seeing’ combines a selection of photographs taken by Helen Levitt on the streets of New York’s Spanish Harlem in the 1940s with quotes from a ‘poetic essay’ by the critic and novelist James Agee, intended for a book which remained unpublished until 1965, ten years after Agee’s death:

It is clear enough by now to most people that ‘the camera never lies’ is a foolish saying. Yet it is doubtful whether most people realize how extraordinarily slippery a liar the camera is. The camera is just a machine, which records with impressive and, as a rule, very cruel faithfulness precisely what is in the eye, mind, spirit, and skill of its operators.

It is, in fact, very hard to get the camera to tell the truth; yet it can be made to, in many ways and on many levels. 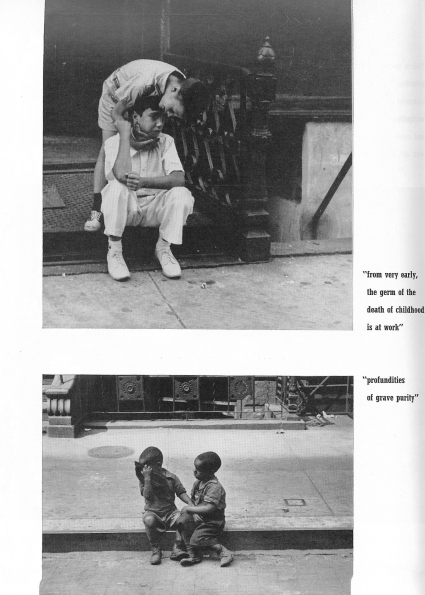 …Helen Levitt’s photographs seem to me as beautiful, perceptive, satisfying, and enduring as any lyrical work that I know…Most of the photographs reproduced here come as close to the pure spontaneity of true folk art as the artist, aware of himself as such, can come[.] 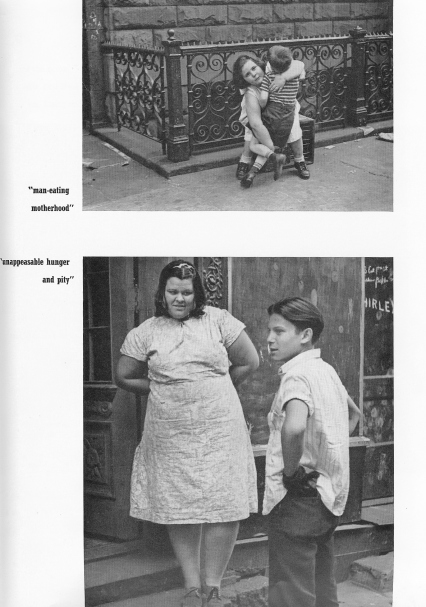 In ‘The Future as a Way of Life’, Alvin Toffler writes about ‘Future Shock’. He would later expand this article into his 1970 book. He bases the term on ‘culture shock’, the disorientation experienced by people who travel abroad:

Yet culture shock is relatively mild in comparison with a much more serious malady that might be called ‘future shock’. Future shock is the dizzying disorientation brought on by the premature arrival of the future. It may well be the most important disease of tomorrow.

…I believe that the malaise, mass neurosis, irrationality, and free-floating violence already apparent in contemporary life are merely a foretaste of what may lie ahead unless we come to understand and treat this psychological disease.

…The human ‘body’ in the future will often consist of a mixture of organic and machine components…How will it ‘feel’ to be part protoplasm, part transistor?…Such fusions of man and machine – called ‘cyborgs’ – are closer than most people suspect.

…Individuals now train for a profession and look forward to remaining in that profession for the entire period of their working life. Yet within a generation the notion of serving in a single occupation for one’s entire life may seem quaintly antique. Individuals may need to be trained to serve successively in three, four, or half a dozen different professions in the course of a career. The job will no longer serve as a man’s anchor and organizing principle.

In ‘Giotto and Duccio’, John Canaday explores the work of two revolutionary artists whose work gave birth to the renaissance:

There was nothing that Giotto would not try, nothing that he would not dare. He abandoned the safe conventions of a limited catalogue of formulas for drawing and cast his figures in the dramatic compositions that revolutionized not only techniques but the whole spirit of painting. 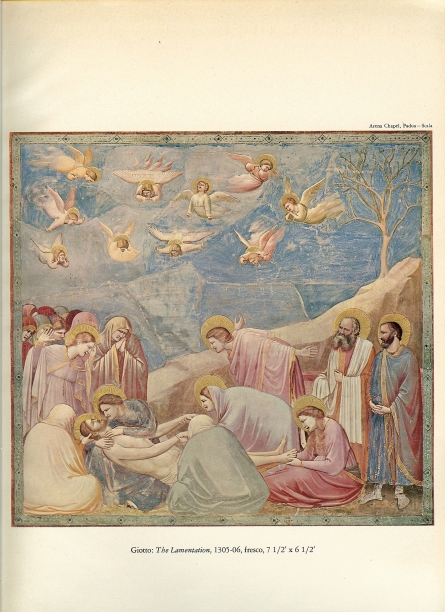 …The brilliance of [Duccio’s] accomplishment seems less revolutionary than Giotto’s, for Duccio made his innovations within the limits of the medieval style. Yet he was the fountainhead of a school of late medieval painting – graceful and elegant, aristocratic and sometimes sophisticated, often intense to the point of neurasthenia – that flourished in Siena while Giotto’s revolution was spreading around it. And by way of later Sienese painters, echoes of Duccio’s influence carried northward to affect an international style that in turn contributed to the final miracle of medieval art – Flemish painting of the fifteenth century.

…Duccio represents a refinement within the boundaries of tradition and Giotto represents a climactic explosion that bursts these boundaries. Giotto’s power and Duccio’s finesse are mutually intensified by juxtaposition; but Giotto’s humanistic clarity and Duccio’s mystical tenderness are seen to be shared, each by the other, to a degree not at first apparent. Each of the two painters achieved an expression so complete in itself that if one of them had never existed, or if none of his work had survived, it would have seemed to us that the other, whether Duccio or Giotto, had been the natural, the inevitable, the only possible and unapproachable master for that particular moment – a thought that could be a bit chastening to the art historian.